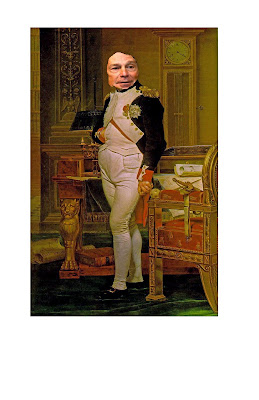 New York:- Mayor Michael Bloomberg has decided to shred the will of the voters and declare himself Emperor.

Oh well, actually just Mayor for a third term (and perhaps a fourth and fifth term after that) which would in effect make him Mayor For Life.

New York City has a term limits law, which limits the Mayor and City Council members to two terms in office. Bloomberg is determined to trash that law, which was approved in two different referendums by the city's voters.

Bloomberg is supported in his decision to usurp the law by former Mayor Rudolph Giuliani, who at the end of his own mayoralty briefly considered seizing power and continuing on as mayor “for an extra three months” on the grounds that after 9-11 he was “indispensable.” Turns out he wasn’t.

Under the the city’s bizarre charter, the City Council can overrule voters by writing a new election law eliminating term limits, then passing it without voter approval. By going along with the mayor, Council members get to save their rear ends when their own terms expire.

With an extra term, they will be able to go back to drawing city pay for what is essentially a do-nothing job in this strong mayoralty city, rather than having to seek work as low-level lobbyists, influence peddlers or ambulance chasers.

The Emperor-To-Be is declaring this a “one time only” deal until, of course, the next time. However, his usurpation of the law theoretically would not extend to future mayors, if there ever are any.

“Let them spend their own billions to seize power,” somebody close to City Hall — well, anyway, somebody only a few blocks away — declared huffily.

Emperor Napoleon Bloomberg had feared loud opposition to this power grab from fellow billionaire Ronald Lauder, who himself twice tried unsuccessfully to run for mayor. In 1989, Lauder spent $12 million in the Republican mayoralty primary and won 37,000 votes for his money — the equivalent of almost $350 a vote.

Lauder in the past had been a champion of term limits and it was feared at Bloomberg Palace that Lauder might launch an advertising campaign against the Bloombergeonic power grab. This would force both Lauder and His Majesty, Emperor Napoloen Bloomberg into a political advertising war in which they’d have to match each other’s spending, billion for billion.

It is not known  precisely how His Royal Majesty, Emperor Napoleon Bloomberg convinced Lauder suddenly to reverse his own highly principled stand on term limits.

While the word passing from Bloomberg Palace to the press is that it’s only because in a financial crisis, His Royal Majesty, Gracious Emperor Napoleon Bloomberg feels just as indispensable as Giuliani felt after 9-11, Lauder must surely know the maxim coined by the late French general and president Charles DeGaulle: “The cemeteries are full of indispensable men.”

More likely, His Royal Majesty, Most Gracious Emperor-for-Life Napoleon Bloomberg hissed into Lauder’s ear, “Listen Ronnie, if you don’t go along with this I’m going to have Ray Kelly send some cops over to squeeze your nuts between two bricks.”

Up next: public hangings
of weeping 10-year-olds

Kelly is the Emperor’s police commissioner. His cops are already known for such draconian measures as roughing up and arresting cyclists on phony charges when they demonstrate against the mayor, confiscating their bicycles and holding them in jails until some judge has an apoplectic fit over the matter. There's one such example here.
Now it turns out that the Emperor’s police commissioner is also arresting children and leading them out of school in handcuffs for minor and non-criminal offenses.

A Palace spokesperson who requested anonymity because the Emperor hasn’t officially been crowned yet, confirmed this and added:
“At His Majesty, Most Beloved Gracious Emperor-for Life Napoleon Bloomberg Dada’s inaugural coronation, there will be a display of imperial power during which any protesters against His Magnificent Imperial Graciousness will be tied to posts and flogged, while approximately 300 ten-year-olds will be executed in a mass simultaneous hanging for grave transgressions — not only smoking pot but also stealing a piece of blackboardchalk or throwing an eraser.”