Thanks, Republican economics, for all the poverty – and keep cheerleading for it, John McCain. By the way, I love your dumb hat. 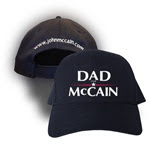 With John McCain essentially promising four more years of the Bush economy, with maybe some draconian budget-cutting measures thrown in to "reduce the deficit," it might be worth taking a look at some recent poverty numbers.

These come from an e-mail sent to me a few days ago by New York State Senator Liz Kreuger. She gets her information from a report from The New York Women's Foundation. It has to do with women but trust me, men and entire families are getting sucked into the same poverty hole.

• Today, 15.2% of New York's women live below the Federal Poverty Threshold ($19,806 for a family of four; two adults and two children), and 26.8% of all female-headed households with children live below the poverty line.

Mind you, we're talking not about a long-declining rust belt state. This is happening in filthy rich, billionaire-loaded, $15 million luxury apartment-filled New York State. As the middle class slowly sinks into poverty while the super rich grow ever more super and richer, what does John McCain have to say about the economic policies that have brought us here?

• He'll make it harder to raise taxes. Umm, he forgets to mention he's talking mainly about taxes on the rich. Warren Buffet, the billionaire investor, has complained that his secretary pays more of her income in taxes than he does.

• McCain will keep the tax cuts for millionaires on their capital gains and dividends. You're a poor jerk who only has $40,000 in a CD? Sorry bub, no tax break on bank interest for you.

•But McCain will cut the corporate tax rate 10% (thus shifting more of the burden to wage earners.)

•He'll also institute "pro-market health care and Medicare reforms." You don't know what that means? It means getting you out of Medicare and into an HMO with the disguising title "Medicare Advantage." Whatever they call it, it's an HMO. Did an HMO ever lower your health insurance rates?

I'd keep on going, but I'm almost ready to puke. Obama may have his faults, but if you don't vote for Obama what you're likeliest to get – if you're still part of the middle class by the time the next presidential term comes around – is impoverished.
P.S. What's with the dumb hat McCain is peddling on his website? Does he want to make us feel like we're all his kids? What's he trying to tell us? If he's the dad, who's the mom? I don't know about you, but I've never been in the same birthing room with Cindy McCain.
Posted by The New York Crank at 5:01 PM