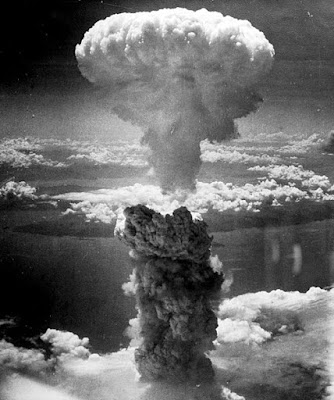 The Nagasaki blast. It killed fewer people than all the Americans who have died of COVID-19 to date. (Photo, Wikimedia Commons.)

As of December 11th, the date I’m posting this, America has lost 293,000 of its citizens to COVID-19. Commentators have taken to comparing the huge number of COVID-19 deaths to the loss of American soldiers in WWII.

I prefer another comparison.

The A-bombs that the U.S. used to flatten Hiroshima and Nagasaki in 1945, according to estimates that are sometimes described as “over conservative,” killed or wounded a combined 225,000 people. That’s 68,000 fewer than the 293,000 Americans dead of COVID-19.

There are 251 significant American cities have smaller populations than the American population lost to COVID-19 thus far. America, we’ve been nuked. Yes, nuked by a virus, not an atom bomb. But the end result is the same — dead American bodies, unimaginable human suffering, and a line of coffins stretching into the distant horizon, and growing longer every day.

And who, through his policy of neglect, denial, and downright lies, not to mention inattention when there was a golf game to be joined, is responsible for likely half those deaths? Yes, Donald Trump.

He has, whether through benign neglect or, more likely cold indifference, killed off enough Americans to fill a good-sized city, with more deaths coming every day, more than 3,000 a day at latest count.

Is there no accountability for this?

Remember, we are talking about a president who has no qualms about putting people to death. His Justice Department this week executed a man named Brandon Bernard for murder who was just 18 years old at the time the crime was committed. The case had been appealed up to the Supreme Court. The New York Times reports:

In her dissent, Justice Sonia Sotomayor argued that if the prosecution had not withheld the evidence and knowingly elicited false testimony as Mr. Bernard claimed, there is reasonable probability that he would not have been sentenced to death. She also contended that an appeals court that denied Mr. Bernard’s motion in a case related to the testimony “got it wrong,” and required too strict a standard that “perversely rewards the government for keeping exculpatory information secret.”

Speaking of perversity, in Donald Trump’s haste to execute as many prisoners as possible before he leaves office, Bernard was one of six federal prisoners scheduled to be executed between election day and Trump's last day as President. And Trump, evidently in the thrall of his own depraved personality, has urged that instead of lethal injection, his condemned victims ought to be electrocuted or face a firing squad. In the face of declining support for the death penalty, even some parts of the religious Christian community that usually backs him seem shocked.

It’s hard to imagine why Donald Trump wants this, other than to satisfy some twisted inner lust for cruelty.

But if the murder of two people, or murder committed by a mentally-ill woman are worthy of the death penalty by electrocution, a hail of bullets, or even an injection of poison in the view and practice of the Trump Administration, what kind of punishment is Donald Trump worthy of for an atomic bomb’s worth of dead Americans?

5o be fair, Salem had it coming.

What is amazing here is the Trump Derangement Syndrome (TDS), and how leftists are left off the hook.

For instance, why in the world don't China's communists get any blame? Didn't the virus come from there? Didn't Beijing shut down internal travel to and from Wuhan while allowing international travel to proceed afoot?

And less further afield, why is there no blame to be assigned to America's governors? Might it be because the bulk of cases and deaths are in Democrat-controlled states, above all New York (one third of cases I hear), where the efforts of an Andrew Cuomo has not led to any positive development?

I agree with you that some American governors should be assigned — as in the Dakotas, and Florida, where they turned what was essentially a blind eye to pandemic control. New York clamped down. Despite lots of criticism from wounded bar and restaurant owners, he essentially shut down all non-essential services, which for a long time kept the curves flat. Meanwhile, here in New York, Governor Cuomo was on television day after day, issuing updates to the situation, while Republican governors in other states all but pretended not to have heard of any pandemics.

I know it's difficult to monitor what's going on in New York and elsewhere in the U.S. from Paris, but at least know what you're shooting at before you pull the trigger.