There used to be a time, back when America was great, when to be American was to hate a wall. It was a hatred powerful enough to shake our chief rival superpower. Remember this ten seconds?

The United States knew then something then that we seem to have forgotten today. Walls don’t just keep people out. They also shut people in.

Little wonder that the great American poet, Robert Frost, unenthusiastically put up with, and even worked along side of an impossible neighbor, who insists on repairing a wall that serves no purpose while repeating a hollow catchphrase about walls and neighbors. Frost came to the right conclusion.

Nancy Pelosi has suggested, tongue-in-cheek, of course, that Donald Trump will settle for a beaded curtain instead of a wall. But let us not guffaw too quickly.

With Trump continuously backing off his proposal for a solid concrete wall, sometimes describing it as a slatted see-through wall, or a spiked wall, or a fence, Lindsay Graham  now insists “the wall” is really a mere metaphor for some kind of "physical barrier." I take that to mean it could be a row of saw horses, or Nancy Pelosi's beaded curtain.

I can imagine the signs as people approach the border

"WARNING! TURN BACK!
DANGEROUS METAPHOR AHEAD!"

No, Lindsay! No metaphors, please. I want to go with that beaded curtain.

Well, I guess the beads are a metaphor, too. But at least they'd be a physical metaphor, if I may coin a concept here. Anyway....

The beads should be brightly colored and very shiny. Perhaps we could even engrave Trump’s name on each bead. That would not only provide satisfaction to our president, who seems to like bright shiny objects with his name on them, but also would distract immigrants until ICE can come after them, rip their children out of their arms, throw the poor kids into cages, and kill some of the little ones by neglecting mysterious, esoteric, and hard-to-detect infections — such as the flu evidently is, in the opinion of Homeland Security experts on pediatrics.

I further propose that the beaded curtain should be rigged to periodically squirt jets of perfume into the adjacent air. It should be something exotic, deeply aromatic and wildly sexy. Personally, I go for Bijan. According to something I read on the web, Bijan perfume “opens in notes of ylang-ylang, narcissus, orange blossom, bergamot, neroli and pimeto.” I think they meant pimento, but you get the idea.

The wall also should be equipped with loud speakers from which a looped version of Mozart’s Escape from the Seraglio will play 24/7. I mean, it makes sense just because it goes with the beaded curtain and the perfume.

But make no mistake. Thanks to the work of Robert Muller, eventually even many Democrats will demand a wall, too.

They will want it to be at least ten feet high, topped with concertina wire, and watched by armed guards in towers. Here’s an example. 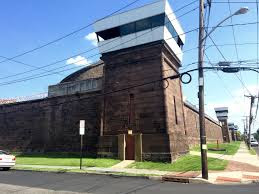 One more thing. We will demand that Donald Trump get incarcerated behind it.