So just a few days ago America was all a-twitter, if you’ll forgive the pun, about an incoherent tweet from our President using the word “covfefe.” 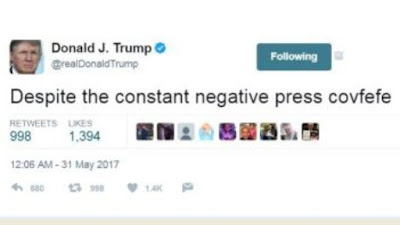 The Internet overheated with speculation as to what covfefe means. Is it a coded message to Moscow? Does it means something like, “Despite the constant negative press, screw it?” And if so, what precisely is the “it” that Trump would like us to screw?

Samantha Bee had, if not the last word, then at least some of the best words concerning the matter.

But frankly, I think the mass reaction was mystifying. The word covfefe is no less incoherent than Donald Trump’s foreign policy. Or the precise nature of his repeal-and-replace plan for Obamacare.  Or his tax policy. Next to those weighty matters, what’s a silly non-word?

Moreover, covfefe turns out to be a useful word. Hereafter, we can refer to it whenever Donald Trump utters an obvious lie, or makes a highly dubious statement.

"It’s just more covfefe," we can tell one another. In fact, we can nickname the man in the White House President Covfefe. And hey, be careful where you walk. Those dog owners never clean up after their animals. You almost stepped in a big pile of covfefe.

But then, as quickly as Donald Trump taught us a new word for what’s on his mind, attention turned away from his covfefe to something the comedian Kathy Griffin had done. In case you’ve just returned from a cruise in a submarine and missed the news, she posed with herself holding a blood-stained object resembling Donald Trump’s severed head.

To be honest, it really was stupid, tasteless and, if you want to stretch a point, sort of threatening. Little wonder Griffin abjectly apologized, which evidently wasn’t enough to save her annual New Year’s Eve television gig with Anderson Cooper. Alas, somebody else will have to make with the wisecracks from now on when the ball drops in Times Square.

But I’m a bit amazed by the reaction from the folks seated over the right wing while trying to pilot their way out of America’s tailspinning trajectory.

A comedienne holding a fake bloody head  was not nearly as threatening as the Florida gun store owner who sold targets with the faces of Hillary Clinton, Bernie Sanders and Barack Obama on them, a remarkable feat of tasteless retailing reported uncritically by the right wing Internet rag, The Blaze.

Instead, the article, under a photograph that showed not only the targets, but also some choice samples of rapid fire weapons the store will sell you,  told gun owners how to reach the gun store on the Internet to make purchases. Not a peep of complaint out of Donald Trump. Draw your own conclusions.

It's amazing how the right wing, previously silent on the subject of shooting Democratic presidential candidates in the head, exploded in a chorus of whines and outrage at the depiction of a comedienne holding Donald Trump’s head severed from his body. As if it’s a lot easier to sneak into the White House and decapitate its inhabitant than to pick off a Democrat on an outdoor platform with a long range rifle.

Not least among the complainers was President Covfefe himself.

“Griffin should be ashamed of herself,” he whined in a tweet. “My children, especially my 11-year-old son, Baron, are having a hard time with this. Sick!”

Except, wait a second! Griffin took down her tweet and self-abasingly apologized. The “fake news” media like CBS, NBC, ABC. CNN, and others showed a blurred out photograph of what Griffin was holding. You knew it was a presidential head only because the text, or the television reporter, told you it was a presidential  head. Otherwise, it might just as well have been a badly blurred head of carrots.

But there was an exception. Breitbart News published the photograph, un-blurred. As of this posting, it’s still out there on the Internet for little Baron, and all the other 20-something  and innocent 30-something presidential children to see. And who is a founding member of the board of Breitbart, and its former Executive Chair? Why, none other than Presidential advisor Steve Bannon, who works down the hall from President Covfefe.

Clearly, if little Baron and the 30-something kids is having such a hard time with that blurred photograph, Steve Bannon’s pet publication must be giving them nightmares. But have we heard a peep out of the President concerning Breitbart, which he staunchly supports? Has he walked down the hall, flung open Bannon’s office  door and shouted, “Steve, have your pals at Brietbart take down that image or you’re toast here!”

Besides, if we had a real mensch in the White House he would have ignored the photograph, or laughed it off, or reveled in it, and ordered a photograph of Giffin holding his head to be imbedded in plastic as a desk toy, paperweight, and defiant souvenir. Instead, all he had to offer was a tweet that made him sound like a wounded bird.

The real reason for the whiney Presidential protest is that our Commander in Chief is a delicate little snowflake, who will melt at the merest suggestion that he is not beloved, adored, and worshipped (am I getting sort of redundant here?) by everyone. This despite his own advocacy of “a halluva lot worse” than water boarding. Not to mention that people ought to “knock the crap” out of anybody who protests his outrageous positions.

A swedish man Per Holknekt have take the right to word covfefe.

Still amazed at the ease with which the right wing feigns shock at Griffin. Such entitled bastards! They get to threaten the rest of us at will; she makes a tasteless video and it's a hanging matter.

Love your comment, northtierthanthou. You've made an excellent point. It almost makes me wish I had a "like" button on this blog.

Crankily yours,
The New York Crank