Donald Trump isn't far enough off the wall for you? Try this dude.

I came across a ragged poster today that the individual below had glued to a wall on the far west side of midtown.  Instantly I knew I was seeing the work of a person of interest.

He's a political candidate, although it's a bit ambiguous as to whether he's running for President, the Senate, Congress, or the Mayor of Gutenberg, NJ. Maybe it's all of the above. His program is an amalgam of Bernie Sanders' and Hillary Clinton's planks, more-than-generously seasoned with Donald Trump's paranoia,

Oh, you might want to run and get a bowl of popcorn before you watch this:

And here's his poster, as I photographed it, directly from the wilds of midtown's far west side. 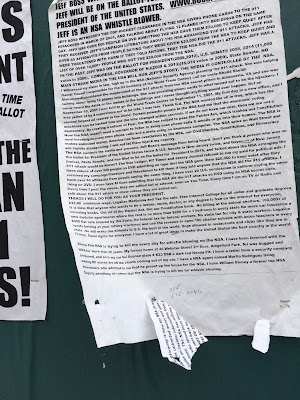 And what's to stop you, if you're disillusioned by Donald Trump, and you can't bring yourself to vote for Hillary, to write the guy's name in? It's Jeff Boss.