The sacred U.S. Constitution guarantees us freedom of religion. Freedom of MY religion that is, not YOUR religion. What next – witchcraft trials? 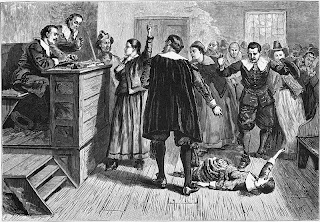 I don’t know what it is with parents. After listening once to Johnny Cash singing “A Girl Named Sue,” most of us should know better than to name our boys Sue, our girls Butch, or any of our kids with any kind of name that verges on outlandish.

That’s common sense, I suppose. But naming our own kids is still a more or less tacitly understood right, which a court should have no right to take away.

Seems that down in Cocke County, Tennessee, Judge Lu Ann Ballew of Chancery Court ordered a child’s name changed from Messiah to Martin. Her reasoning, a landmark in American jurisprudential dunderheadedness, marks Judge Ballew as one of the greatest legal minds of the 17th Century. And here it is:

“The word Messiah is a title and it's a title that has only been earned by one person and that one person is Jesus Christ.”

In other words, hew to the judge’s vision of religion, the diety, and Christianity – or else. Another interpretation, "There's nothing about this in the legal code, so I'll make up my own law."

Of course, this isn’t the first time in America where citizens have been punished for thinking differently, although most of them happened four centuries ago. Back in the mid-1600s, a Rhode Island man named Christopher Holder had one of his ears cut off for preaching Quaker beliefs.

Anyway, pending the first witch burning in Tennessee, which ought to come any day now if judges like Lu Ann Ballew (whose own name, speaking of names, sounds as if it was lifted straight from the L’il Abner Comic Strip)…if judge Ballew gets her way.  Meanwhile, go here and enjoy Johnny Cash singing “A Boy Named Sue.”
Posted by The New York Crank at 2:30 PM