Kim Jong-Who? Still focused on a Boston terrorist bomb after a week, our memory-starved news media all but forget the threat of an A-Bomb. Quick – somebody run out for Ritalin! 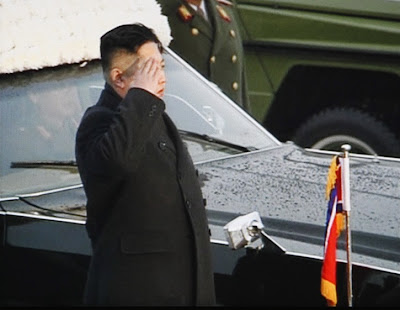 So there we were, almost the entire world full  of us poor humans, sitting on tenterhooks wondering whether Kim Jong Un,  the North Korean bad boy with the worse haircut, would blow the world up.

Morning, noon and night you could turn on your TV or your Internet browser, or smartphone, or pick up your favorite print news medium, and the story would smack you in the face:

Kim Jong-Un was threatening to “incinerate” us.  He had an A-bomb. He had an A-bomb small enough to mount on a missile. He had a missile that could reach South Korea, or Japan, or Hawaii, or maybe even the West Coast. Or he didn't, depending on what you were reading. He was forcing South Korea to want a missile of their own. But in any case,  he was clearly a big fat menace.

Worse, I suspect that half our nation was really, deeply, intensely worrying not about the bomb, but about who the damn kid’s barber is, and how to make sure we avoid ever getting a haircut in even so much as the same hemisphere as North Korea.

But even if Kim Jong-Un turns out to be nothing more than a bad joke (last heard from, he was begging food from Mongolia; the diplomatic equivalent of looking for a not-too-rotten banana in a dumpster) he’s the kind of joker you really need to keep a close eye on. Which is why I’m surprised he suddenly dropped off the front pages and even most of the back pages, not to mention most of the blogs, e-news websites and twitteria generators of the United States.

Well, to be fair, we had an horrific act of terrorism in Boston, with awful consequences, and it’s no surprise the news media focused entirely on that for a few days. But hey, the bombing was Monday, April 18th, and a week later the news is still all Chechen  pressure cooker bombers and the equivalent of the speech every police beat reporter has heard since the dawn of moveable type from the mothers of murderous juvenile delinquents.  ("He was a good boy, my Mikey. He was such a cute baby. He was never in no trouble before. He always made his own bed. He was at the top of his class in continuation school. Somebody must of framed him.")

Meanwhile, there has been virtually nothing on North Korean atomic bombers, who could do a lot more damage than you can ever do with gunpowder and a pressure cooker.

We interrupt this drivel to
bring you  more drivel

Still intently shoveling through the dregs of the Boston story, the news reporters and editors are now focusing the Tsarniev brothers’ mother’s state of denial and insistence that the bombing never happened.  And besides, she’s saying, it was all really a plot by the U.S. government or somebody to frame her sons. Hey, stop the presses! The mother of a criminal is in denial about her son’s guilt!

What is it with our wayward news media? Have they suffered a massive attack of attention deficit disorder? Or is it not ADD but amnesia, contracted by constantly bumping into each other while waiting for the next Boston press conference to start? Or is it a pandemic of Institutional Alzheimer’s Disease?

I’d accuse the news folks of being too dumb to hold two thoughts in mind at the same time. But the walk-and-chew-gum theory doesn’t really work. Unfortunately, these news folks are doing many things at once. They no longer can just report. Kind of like the old Hoover vacuum cleaner slogan (“It Beats While It Sweeps While it Cleans”) these guys have to report, while they blog, while they tweet. Otherwise I’d be taking up a public collection to send Ritalin to the press.

No, I blame the editorial high honchos, who must assume that we’re all too dumb to read, or to watch two things in the one day, and thus don’t bother to tell us more than one story at a time.

Unfortunately, this will keep up either until we have another mass shooting in some suburban town, or until Kim Jong-Un incinerates Tokyo. And at that point it will suddenly become:  “The Boston What?”
Posted by The New York Crank at 3:40 PM

Seems to me that our no-jobs problem has been solved on the right.

So many manufactured events, so little time.

Thanks for helping us keep up!

Not only are they the Ambien, Prozac, Viagra and crotch-shots on Fox/CNN Kool-Aid but they're drinking it too!

Jaxson corey said...
This comment has been removed by a blog administrator.
12:17 AM