It's time to repeal the Second Amendment. That's right. Repeal it. 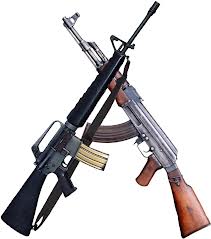 It’s time to end all the pussyfooting around gun “rights.”  What we're really talking about is murder weapon rights, and they ought to be taken away.
The Roberts Supreme Court mis-read the Second Amendment, which makes it as plain as a bullet between the eyes that the purpose of the amendment was to support a “well regulated militia.”

It’s the only item in the Bill of Rights that included the founding fathers’ reasoning for it, so there would be no mistake of the law's intent. And I quote:

A well regulated Militia, being necessary to the security of a free State, the right of the people to keep and bear Arms, shall not be infringed. (Italics my    own.)

At the peril of sounding repetitious, nowhere did the authors of the Bill of Rights feel it necessary to explain the First Amendment. Or the Third. Or the Fourth or the Fifth. They only spelled out the reasoning behind the Second.

The purpose of the Second Amendment was only to enable citizens to band together in a well-regulated organization for mutual defense. We still have those organizations today. They're  called your state's National Guard. I encourage every gun-lover to enlist, and to indulge their perverse love of murder weapons that way.

Sadly, legislators and opinion makers in this country have gone off the deep end by kowtowing to gun “enthusiasts.”

And as we’ve seen, an “enthusiast” will enthusiastically blow you to kingdom come, kill a pregnant mother, steal his own mother’s guns and murder her, bludgeon his own grandmother, or blast away a schoolroom full of kids. And none of that has anything to do with a well regulated militia or freedom from oppression.

When the current Supreme Court misread or deliberately misinterpreted the Second Amendment, it in effect handed a license to every shunned lover, aggrieved employee, angry loser, nut job, road-raged driver, sexual pervert and nincompoop in the nation to go murder as many people as they could.

Apologetically mumbling, “Well, we don’t want to interfere with hunters,” or, “we only want to eliminate high-capacity magazines,” is a perfect example of people opposed to gun murder negotiating with themselves.

We need to repeal the Second Amendment, and then, state-by-state, or better yet locality-by-locality, allow certain people such as hunters and those under direct threat of violence, (backed by a court order of protection) to obtain a gun license.

Like a driver’s license, a gun license should have an expiration date. Moreover a license to bear arms outside of a legitimate well regulated militia should be only for the purpose specified in the license, whether that purpose is licensed hunting, target shooting on a licensed gun range, or self-protection against a substantiated threat of violence.

Moreover, no high capacity ammunition magazine ownership should be permitted, except for members of a legitimate armed force such as the U.S. Army National Guard in the course of performing their official duties.

Throw gun-owning violators
in the slammer

Next, the Federal government, along with many state and local governments, should go after gun-owners who aren’t licensed, or whose guns are unregistered, and clap the bastards in prison. For a good long time.

You say that legislation to do any of this doesn’t stand a chance? Not today maybe. But nobody has been pushing for this kind of law – or legislating, or educating, or advertising on behalf of it.

This won’t be an easy campaign, and it won't be a quick campaign. But it can eventually prevail, and the time to start is now. The Second Amendment can be repealed  – and it should be repealed.

From what I’ve seen, some of those violent video games on the market are horrid. But they’re available any place there’s an Internet, while only in the United States and other Third World nations with lax gun laws is there an epidemic of gun deaths. And yes, given our lax attitude toward lethal weaponry and lethal people owning that weaponry, I'm listing the United States as a Third World nation.

We need to do something about finding better medical care for the mentally ill in this country, but that’s a separate issue from getting guns off our streets, our schools, our shopping centers and our movie theaters – and out of hotel and convention hall “gun shows.”

Knowing whether certain kinds of individuals are mentally unstable people with a tendency to violence is at best subject to matters of opinion. Knowing whether someone has a gun or doesn't have a gun is a much simpler proposition to judge.

The cure for gun deaths

The only reliable antidote to a bad guy with a gun is not a "good guy with a gun". The cure for our outrageous rate of gun murders is making sure nobody has a gun, except for a few qualified individuals.

No guns. No gun murders. You can't shoot somebody by pointing your index finger and saying "bang." It's that simple.
Posted by The New York Crank at 3:48 PM

They said the same thing about Repeal in 1913. It took a while. And enough public outrage. But by 1933, Repeal occurred.

The outrage is building. The "a while" may be 20 years. But we'll get there, because more and more people are getting fed up with the dead bodies littering the landscape.

Fuck you you american cunt Take our guns and you have a civil war.

go ahead and moderate my post you chicken shit

like the rest of our rights, you will choose to keep people from speaking what's on the majority of americans are thinking..

|ook around you, we are arming up at a unprecedented rate. The gun manufactures are backed up for months, it may take years to bring the supply down to the demand, Ar 15 prices have tripled and yet we buy up everyone we can find... we will not give up our guns for any reason,

The guns are not the problem, and never had been. More people were killed with hammers, than with ar's last year. proven fact, look it up.

Lack of medical care, poor security is the issue, and you are all looking like a bunch of ditsy blond misfits trying to ban guns,while totally not addressing the the real problem .

# 1 going out and securing our schools with armed guards and a security gate.


#2 every american in the usa should have a annual mental exam.


like, I said though, you don't have the balls to post this because you are a chicken shit, trying to blame your / our lack of for site in protecting our children, and providing health care on a scary looking object. like a hammer. what's next ? banning air powered nail guns with 300 nail drum mags ?


fucking wake up. you and people like you make me sick.

People like you are precisely the reason why we need to repeal gun rights: out of control, threatening violence, drawing on "proven facts" that are neither proven nor facts, daring people to "go ahead and moderate my post." (Is that anything like "go ahead, make my day?") and general rabid foaming at the mouth. Your letter leads me to wonder not whether you ought to be locked up, but whether you ought to be locked up and put on anti-psychotic medication for the rest of your life.

By the way, "Anonymous," I know you're in Butler PA, and I know your Internet service is Butler Cable Services, and I've got your IP address. Anything happens to me or my family, you'll have cops and Feds swarming over you and through your underwear like maggots on a 3-days dead deer.

Be careful about thinking that it's "you people," who are making you sick. It could be the flu. And it may have gone to your brain. If I were you, I'd print out a copy of your post and go straight to the emergency room with it.

That's Armstrong cable services, you're on. Sorry for the slip.

Well Anonymous, here it is, posted for all the world to see, so it seems to this cranky old Oregon Logger that the one lacking balls is the one lacking the balls to put your name to your wolf tickets. The Logger in me wagers you couldn't fight your way out of a wet paper bag, the VietNam Veteran bets you'ld shit your pants in a firefight. I have to compliment you, though, I don't believe I've every seen a better example of diarhea of the mouth.

What ARE you people so afraid of?

Please sign and share with everyone. We should and will do everything we can to ensure the safety of the American people.

Militia. An army composed of ordinary citizens rather than professional soldiers.

Freedom of speech is great. I do not condem you for your view nor would I threaten you for it. I do however disagree with your view and commend you for sharing other views that don't agree with yours. I do believe a mental health exam should be done on a regular bases because there are nuts that shouldn't have a gun. If you took guns from lawful owners, the only people that would have them is government and criminals. We have learned from history that this would be a bad idea so why repeat history? Thank for sharing my view.