A modest proposal to help protect our school kids, and reduce the budget imbalance, with the patriotic help of America’s kindly gun owners.

Good for Wayne LaPierre, the head honcho of the National Rifle Association!

After a godawful silence concerning the Sandy Hook gun massacre of innocent children and their teachers by a gun maniac (who killed his own mother with her licensed guns), although before the massacre of firemen by yet another unhinged nut in upstate New York, LaPierre finally had something to say that we can wrap our minds around – not to mention our teeth.

We should have more guns in schools, he said. In fact, he insisted, we should have an armed guard at every school. He made no estimate that I’m aware of the cost of doing this, although others estimate that it would be a bare minimum of $5,500,000,000 (that’s five billion, five hundred million dollars) a year.

Who’s supposed to pay for it? Why, you and me, of course.

“Waiter! This is not my check!
Please send it over to Mr. LaPierre's table.”

But why should any taxpayer who doesn’t want to own a gun, or who is horrified by the proliferation of guns, pay for protection against the misuse of an arsenal of guns owned by his cranky neighbor with the slightly off-kilter son, the one who lives in the attic and really hasn’t held a steady job since he got fired from a fast food joint for general insubordination and surliness?

Hold that thought while I mention this:

Not only do I pay annual real estate taxes. If I sell my home at a profit  I’ll have to pay capital gains taxes. People complain about taxes on their homes, of course. Doesn’t matter. There’s an old principle of law that says, “If you own property, you owe the government.” Goes back to the founding of the Republic in this country. And to the English Crown under the legal system on which our legal system is based.

In fact, some states, like Connecticut, have a general property tax. You pay tax not only on the assessed value of your home, but also on your car. And of your snowmobile or your horse if you happen to own any of those, as some Connecticut citizens do. [Connecticut taxation statutes, chapter 203 - Sec. 12-71)] 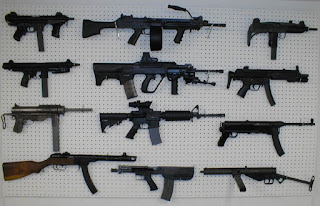 Could these be budget balancers?

So why not charge gun and ammunition owners with a federal, and state, and local “Guns, Bullets, and High Capacity Magazine Ownership Tax?” That would put the cost of all those armed guards in schools right where it belongs – in the tax bills of those who are the source of the problem.

What’s that? You say you never use your weapon? Listen, even if you keep it locked in a safe and only want it to ward off a violent home invasion, or you hang your automatic rifle on the wall in your den as a decoration, you’re using it for that purpose. So you’re a gun user. If you live in Connecticut, you can't escape the tax on your horse and snowmobile by demonstrating you never ride either the vehicle or the animal. If you own it, that's enough. Pay up, dude.

Or don’t pay and go to the pokey

With other taxes, we don’t catch every tax cheat, but we catch and punish enough of them to keep most citizens honest. If we can have honest business owners, doctors, and ribbon clerks, there’s no reason we can’t have honest gun, bullet and high capacity magazine owners.

Ultimately, the only thing that will reduce the amount of gun-and-bullet violence in this country is to get rid of, or largely get rid of the guns and bullets. But until we can have that, let’s at least make the people who manufacture, distribute, sell, keep, and play with lethal weapons pay to keep all the rest of us safe from their....oh, call it a pastime.

It’s perfectly legal. And it will lay the cost of protecting our kids – with a plan the representatives of the gun owners themselves are calling for – right at the feet of the cost creators.

Cross-posted at the No More Mister Nice Blog
Posted by The New York Crank at 4:57 PM

Really good idea. The only drawback I can see is all the crying about the tax. Conservatives own the NRA and they don't even want to tax billionaires more to pay down the debt they are always howling about. Guns and money are two things this culture worships. It would be a hell of a battle to make them pay. Just sayin'

Everyone wants to blame someone and the NRA is just stupidly standing there.

here is one for ya. That piece of evil crap in upstate NY..

he got the guns as a result of someone stupid enough to buy them for him.

Where then guns came from..

Thats illegal and there are laws for that. Though I feel 10+ years is a bit low considering.

Maybe if she knew what all the laws were maybe, just maybe she would have thought about it more than a New York second and said hell no.