Excuse me, Mr. Romney, but you make half of America want to puke 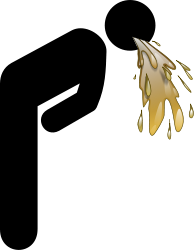 So now comes word that Mitt Romney has decided that 47 percent of Americans are just a bunch of freeloaders who think we’re “entitled” to healthcare, a modest retirement, maybe even to live.
And after the word leaked out, he wouldn’t take it back. (Not that I’d believe him if he did.)
Mr. Romney, the deductions for Social Security and Medicare from your staggeringly huge paychecks may have been so small in comparison to your earnings that you didn’t notice, sir, but we paid for those entitlements, as did our employers. We paid week after week, year after year, decade after decade. We paid premiums for Social Security. We paid premiums for Medicare. And we have every right in the world to collect what we paid for.
If a con man charges me tens, or even hundreds of thousands of dollars for insurance premiums, and then says to me, “Hey, sorry, but you’re a dependent freeloader and you're not entitled to collect on your insurance,” I will call the cops. I will get him sent to jail. He’s a crook. He’s another Bernie Madoff.
So Mr. Romney, when you make it clear that you intend to pull the same stuff if you become president, you’ve also made it clear what you are.
And perhaps “crook” or “another Bernie Madoff” is too mild a characterization.
Posted by The New York Crank at 4:06 PM

I think charlatan would be a good word too. Isn't it wonderful how technology outed him? I also heard on tumblr it was Jimmy Carter's grandson who got the vid. Great post Crank!