Welcome to the 12th Century, you serfs! Now plow that land while the Lord of Billions exercises droit de seigneur on your daughters. 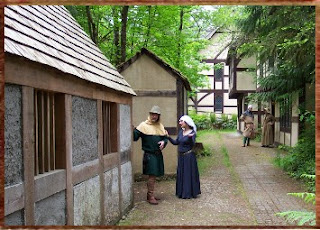 So the Wisconsin recall election that was meant to put union-busting Governor Scott Walker out to pasture has failed, and everyone has something to say about it — here and here, for example.

Even the Official Town Crier of the self-righteous right had some comments. Not to mention the ladies-in waiting to His Majesty, the Bain of Mitt, including Lady Peggy the Weepy, and Michelle the Nasty.

In light of the big right wing celebration of Wisconsin’s return down the slippery slope to Medieval times, with a rope attaching it to all the rest of us, it’s time one of us medieval trolls came out from under a stone bridge and spake what no one else dare sayeth.

Okay, I’ll step up to the plate…er, gibbet.

Voters of Wisconsin, you have just shafted not only yourselves, but also every working man and woman in America. You have plunged a dagger into the heart of America’s future.

The Walker campaign, funded with $30 million plus, managed to turn your heads away from the issue at hand: that the governor was trying to destroy unions that had built the middle class, raised this nation out of serf-like working conditions, and provided both safe workplaces, and a future and a retirement for the little guy.

Remember, the Right Wings spent $30 million. These are guys who go ballistic when you talk to them about raising their taxes ten cents. So why do you think they’d shell out $30 million? Simple. They’re going to get something for it. And what they’re going to get is not only your labor for next to nothing, but also your body. How do I mean this?

They’re opposed to regulation of business, ostensibly to assist growth and create jobs. That claim of theirs, to call it what it is, is pure bullshit. What they want is to avoid the expense and liability of keeping workplaces safe.

They want to be able to poison your water with coal slag and shale gasses without fear of punishment. You’ll die of cancer while they sip Perrier.

They want to be able to avoid spending money on expensive safety equipment or shelling out to workers who get injured or killed as a consequence.

They want to be able to cut your salary and benefits and Social Security income and medical insurance just because they feel like it. And believe me, they’ll always feel like it.

And you won’t be able to say anything about it, because you won’t have a union to back you up, or another job to go to. Tell them to “take this job and shove it?” Fat chance when you can’t get another job, unemployment insurance has disappeared, and you’re on a list of troublemaking knaves. Instead, they’ll foreclose on your house.

Once they foreclose on your house, they’ll rent it back to you at crippling rates. And you’ll have no choice in the matter because if you complain, they’ll evict you.

Your children? You’ll have plenty of them. No birth control and no abortion means you’ll have so many mouths to feed you won’t dare challenge the billionaire nobility. And meanwhile, you’ll be producing plenty of cheap laborers and military cannon fodder for them.

No regulation means they have a right to do any of this. No union means no protection.

Did I mention your wife and your daughters? Don’t even bother trying to lock them up. The rich nobility will simply break down the doors. And you’ll have nowhere to complain, because you’ll be just a serf.

Twelveth Century stuff? You betcha. That’s what they want, and thanks to the voters of Wisconsin, that’s what the Koch and Romney billionaires are much further on their way to getting. As the 12th Century Wizard Yogi Berra once said, it’s déjà vu all over again.