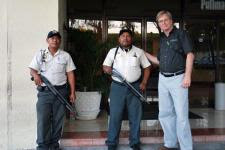 Enjoy your money now, pal. It’s going to be hard shuffling your bankroll to count your wad when your thumbs are chopped off.
Posted by The New York Crank at 11:44 AM

My friend and I wandered around Quito in 1997. We did not experience the perception of danger you did. The presence of wrought iron bars sharpened and tipped with glass over every window was really striking.

My cousins in Guatemala worry about kidnapping all the time. Everything you say about this is true.