Republican Senatorial Candidate Linda McMahon’s plan to “create jobs” is actually a plan to enrich the rich at your expense. And to cost your job. 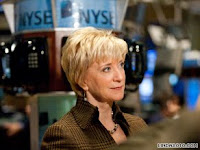 As a neighboring New Yorker, I’ve been bombarded with so-called “businesswoman” Linda McMahon’s televised promises to create “jobs jobs jobs” if she gets elected as Senator from Connecticut.

The commercials are nonstop, day and night, night and day.

So I went to her website, just as she encouraged me to do, and checked out her so-called jobs program.

The “program” is contained in a 20-page brochure, and it’s pretty self-evident that McMahon wants to bore you out of reading before you get down to the details — what little there is of them.

Instead, the first six pages lull you with cheap knocks at “career politicians,” paragraph after paragraph of generalities and nonsequiturs, and the valuable economic program news that “Linda and Vince McMahon are celebrating over 43 years of marriage…” a bulletin that ends with her grandchildren count.

Then, little by little, she begins to give away what she really intends to do if she can trick enough voters into voting for her. And if you read carefully enough, it gets mighty scary, mighty quick.

Four McMahon “initiatives” that can bring

the U.S. economy to its knees

McMahon favors four initiatives that she admits having lifted from the Reagan administration.

The first is to “reduce tax rates across the board.” Fine, but you’d better believe that the Wall Street billionaires and multi-millionaires who are socking it away will get a better break than you, fellow taxpayer. Want to bet it’ll work like this: You get $200. The billionaire gets $200,000 million. And then guess what happens to services, highways and other infrastructure? Or to your unemployment benefits, your Social Security or your Medicare? Or to Federal subsidies to schools? Or consequently, guess what happens to your school taxes? Or to the education your kids will get? The list goes on, but I think you get my drift. She'll reduce taxes mostly on the rich by reducing programs for the middle class and poor.

“Reduce regulations and mandates on business” is her second iconic Reagan Administration “achievement.” And what did that result in? Well, an unregulated Wall Street led to the economic meltdown we’re suffering from now, for example. And to the lack of safety enforcement that led to the BP blowout in the Gulf of Mexico.

The truth is, we need more regulations, sternly enforced if we want to save jobs. Those include jobs in small business that once were financed by banks. Unregulated banks have ceased financing small businesses because with no regulation they're free to gamble with depositors' money instead, enriching nobody except bankers. More regulation would also restore jobs lost in the Gulf region — jobs that range from fishing, to travel, to even oil drilling.

“Sound government finances. Don’t spend more than you can pay for,” is her third Reagan policy icon. Fine. If we had that rule during WWII, we would have lost WWII. And where was Linda McMahon when George W. Bush and his cronies were racking up the largest debt in American history? Gee, I didn’t hear from her then. The truth is, the government should control and pay back its debt. But there are times when only borrowing can help an individual—or the United States economy—survive. This is one of them.

“Sound money. Keep inflation low; keep the dollar strong,” is her last Reganomics mantra. Small problem. Inflation has never been lower. We’re teetering on the brink of deflation, not inflation. The dollar has recently gained impressive strength against the Euro. Give that wonderful news to all those unemployed people, Linda.

And she proposes more horrors:

Linda McMahon opposes tax increases and surcharges on the rich, who already are letting what’s the shrinking middle class do the heavy financial lifting while they buy yachts, McMansions, and multiple homes — and walk then away from mortgages at a faster rate than anyone else.

Linda McMahon would give rich investors a better tax break if they lose their investment money, not to you if you lose your job. She would “help [rich] people recover from the devastating losses in real estate and stock markets during the financial crises.” She doesn’t say a word about helping you survive a devastating job loss.

If you have a job, she’d export it to China. She says it in code by declaring she would “Resist protectionist policies that hamper global trade and investment.” She claims the Columbia, Panama and Korea Tree Trade agreements “would increase exports by more than 1%.” Small problems: Exports of what? Mostly of jobs that are already here, that’s what.

Incidentally, there’s a scandal brewing about Linda McMahon and steroids in professional wrestling.

But then, why is a “family values” person like McMahon promoting the violence of wrestling in the first place?