Crooks, “legal” crooks at banks, and guillotines. Maybe it’s time to set ‘em up at the mall for bankers. 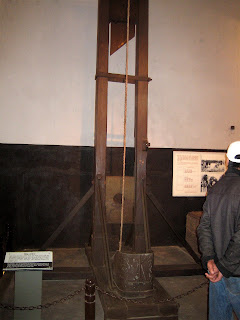 Enough has been said about the crooks at AIG who took taxpayer money that was meant to get the economy restarted and instead distributed it as bonuses for themselves. I’m not going there again today, except to say it’s time to set up guillotines at the mall.

Instead, I want to call your attention today to a danger I haven’t seen getting much attention elsewhere. It turns out that when you purchase a bank CD, your interest money isn’t safe.

Warning: A strange bank can
seize your high-interest CD
and pay you next to no interest

If bank where you bought the CD fails, and another bank purchases its assets, the new bank can, under certain circumstances, grab your money until the CD expires, but pay you virtually no interest.

No problem because my deposit was FDIC insured, right?

FDIC turns out to be
the bank’s friend, not yours

Republic Bank of Chicago acquired the deposits of the National Bank of Commerce, including my CD. I could yank my money out, but only if I did so by March 5th. Well, on March 5th I was sightseeing in Viet Nam, a hell of a long distance from my mail box.

Had Fidelity sent me an e-mail about this on February 25th, while I was still here, I might have been able to do something. Nah! Fidelity uses e-mail to spam me up the whazoo with financial planning offers and other promotions. But when it comes to something urgent, they send it down to the mailroom for sl-o-w processing and snail mail shipment.

But I digress. Republic Bank of Chicago cut my rate from roughly 3.2 percent to a quarter of a percent — in other words, they’re paying virtually nothing to use my money. And now, because I was out of the country when they announced a ten day window for bailing out of the CD, I can’t bail out any more. I have to leave my money there at for a quarter of a percent interest rate that I never agreed to until the CD expires more than a year from now.

In other words, the bank has a right to enforce your CD obligations or enforce "substantial pentalties", while ignoring the bank obligations that led you to buy a CD in the first place. Heads they win, tails you lose.

And all this is legal according to FDIC “guidelines.”

Remember what they did to
the greedy person who said,
“Let them eat cake!”

There’s a greedy bank Chairman at Republic Bank of Chicago named Aristotle Halikias who decided to rip off the innocent CD depositors at another bank by paying them a quarter of a percent more than zilch. Halikias is another example of the banks declaring, “Let them eat cake.”

When they set up guillotines in public places for the likes of the AIG executive staff and Board of Directors, and for greedy deposit grabbers like Halikias, please let me know. I want to be in the front row of the crowd to watch the heads bounce. I’ve been to Chicago and I think the corner of Michigan Avenue and Wacker Drive would be a great location for the scaffold. Or perhaps you can suggest a better one?

Incidentally, I photographed guillotine in the picture at the “Hanoi Hilton” in Hanoi where John McCain once was imprisoned. I had hoped to use my first post back from vacation to tell you more about that. But no, with bankers on the rampage once more, the Hanoi Hilton will have to wait.

That’s because instead of guillotines in a former French prison in Hanoi, we need them here to discourage bankers from grabbing their depositors’ money and taxpayer funds to enrich themselves.

Where is Mme. Defarge now that we need her?

P.S. Okay, Mme. Defarge, you can put down your knitting needles. Or at least for now you can. The bank, prodded by the "best efforts" of my stock brokers, relented and sent back my deposit, although not the rather more substantial interest I thought I had been earning between mid-January and the time the bank, via the broker, got around to notifying me that they had, umm, revised the terms of the CD.
Posted by The New York Crank at 12:36 PM