Pissed off groundhog takes a bite out of Bloomberg: an anthropological, meteorological and political explanation for my foreign readership 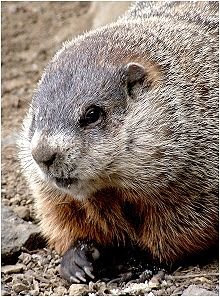 This piece is solely for the edification of my foreign readers. Please don’t read it if you’re a U.S. citizen and most especially if you’re a New Yorker. Mind your own business.
I want to explain to you, dear foreign readers, a curious American folk custom called Groundhog Day.

The “groundhog,” also known as a “woodchuck,” (M. monax) is a North American rodent about the size of what you Europeans and Latin Americans call a “football.”

It lives in the forests of the northeastern United States where it busies itself burrowing holes to sleep in and munching on nuts and other forest flora.

Like its fellow North American forest occupants such as the squirrel (Tamiasciurus hudsonicus), the raccoon (Procyon lotor), and the possum (Didelphis marsupialis), the groundhog’s most threatening natural predator is the automobile. (Automobilis horriblis.)

This is because the groundhog likes to cross roads. If in the course of crossing a road it sees an automobile speeding toward it, the groundhog assumes that if it stands very still, the automobile won’t notice it and will kill something else instead. Unfortunately for the groundhog, it is only half correct. Squish!

This may lead you to conclude that groundhogs are not very bright. However, everything is relative. For example, Americans believe you can use groundhogs to predict the arrival of spring weather.

According to a popular myth, if the groundhog emerges from his burrow on February 2nd and sees his shadow, there will be six more weeks of winter. On the other hand, if he doesn’t see his shadow, spring is, umm…well, closer than six weeks away, regardless of the calendar.

Americans believe this myth because we are stupid.

Well, let’s face it. We really are. Mine is the nation that allowed George W. Bush to become president not once but twice, correct? I rest my case.

Belief in the ability of groundhogs to predict weather has led to a ceremony in a little town in Pennsylvania called Punxsutawney. Every year, the Punxsutawney town fathers dress up in top hats and frock coats. While the press watches and cameras roll, the bewildered groundhog gets yanked out of a box that serves as his man-made burrow. He is held up for all to see. Miraculously, he almost always sees his shadow, even if the rest of us can’t.

There are loud cheers, which scare the hell out of the poor rodent. Then all of us go back to work, relieved to know that winter will last another six weeks. And the groundhog can sleep off this horrible moment in the public eye until next year.

The groundhog’s name is always Punxsutawney Phil. I say “always” because this annual ceremony has been going on since 1887. The groundhog you see on TV cannot possibly be the groundhog they started with. All the same, there never seems to be a Phil Jr., or more likely a Phil the Fiftieth or Phil the Hundred-And-Twenty-Second.

Consequently, we now have a Groundhog Day celebration in New York, starring a groundhog named Staten Island Chuck. Well, it doesn’t happen in the center of New York. If we had this ceremony in Manhattan, too many people would stand in line overnight just to jeer.

Instead, Groundhog Day gets celebrated in a remote zoo in our remotest borough, Staten Island. Only a Staten Islander could tell you how to get there. Not that New Yorkers are all that knowledgeable about getting around their city in any case. If any of us knows how to get to JFK airport by subway, we probably learned it from a French tourist.

This Groundhog Day, Mayor Michael Bloomberg schlepped out to Staten Island, one assumes by limo, to check out Chuck (the groundhog, not New York Senator Chuck Schumer) and see if Chuck’s meterological prediction agreed with Punxsutawney Phil’s prediction.

Unfortunately, Staten Island Chuck was in a foul mood that morning and didn’t want to come out of his box.

Equally unfortunately, this mayor doesn’t tolerate those who don’t cooperate with his public relations efforts. For example, his cops went out and illegally busted demonstrators, most especially bicyclists, in police state raids against protestors during the 2004 Republican convention.

And when he can’t bully them, the Mayor, who on his own is wealthy enough to bail out a bank, finds a way to buy what he wants.

He has in effect bought elections by drowning the opposition in advertising they can’t possibly afford to match. And he has in effect bribed his own city council into overturning a law twice mandated by voters for term limits on elected officials. He did this by encouraging the Council members to overturn their own term limits as well. But back to Staten Island Chuck…

Irritated critter disses mayor.
I say, “Good for you, Chuck!”

Staten Island Chuck was having none of this photo-op. If the mayor woke you up at 7:30 am so that he could aggrandize himself by having paparazzi fire off strobe lights in your face, you’d be disagreeable, too.

Bloomberg then tried the same tactic he used with his City Council. Bribery. He left about half an ear of corn in front of the entrance to Chuck’s box to coax him out. No fool that Chuck. He grabbed the corn and backed into his box with it. I’d rather have breakfast in bed, too.

So the mayor, who wants what he wants — citizens and ground hogs be damned — reached into Chuck’s box to yank Chuck out by the neck. And that’s when Chuck bit Bloomberg, as you'll see in this video.

Well, no real damage done. From what I hear, the Mayor required no more medical attention than a Band-Aid.

All the same, given the fact that a lot of New Yorkers are madder than a pissed off woodchuck about the mayor’s usurping of their term limits mandate, I’d get a tetanus shot if I were Michael Bloomberg.

And now for the weather…

For whatever it’s worth, Staten Island Chuck didn’t see his shadow. Which means, if you believe in this crap, that spring will come very early to New York this year, even if it doesn’t come early in not-so-far-away Punxsutawney. Well, that’s meteorology for you.

Okay, American readers, you can come back in now. Especially if you live in New York. In fact, for your own good, you’d better. As I write this, it’s snowing hard outside.

At the time its groundhog was biting Mayor Bloomberg, the Staten Island Zoo was running a Blood Drive.